I'm slightly worried that the title of this post might be misinterpreted by some but here goes, lol!  I've scheduled this post and I will be in a queue outside my doctors surgery (trying to get more antibiotics, the gold dust of medicines).  It's the first time I've tried it (scheduling not antibiotic queuing, lol!), so I'm also worried about that but if it doesn't appear I don't suppose it's the end of the world.  I'll post it later!!

Here is the last of the cards that I made for the CCAYR challenge for March DT inspiration . . . isn't he just a darling (love those ears!!) and so aptly named . . . Sticky! 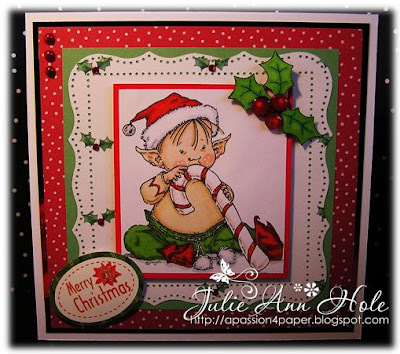 Again, apologies for the photography standards, if I remember rightly, these photos were taken quite late at night under the light of my craft lamp, lol!  Not surprising then that they turned out like they did!!

The paper used was from Pepper's Christmas and I love this Holly paper.  I stuck a red adhesive gem at the point where the leaves meet.  The photo doesn't really pick this up.


The punched out shape was made with Martha Stewart Punch around the Page set called 'Cherish'. 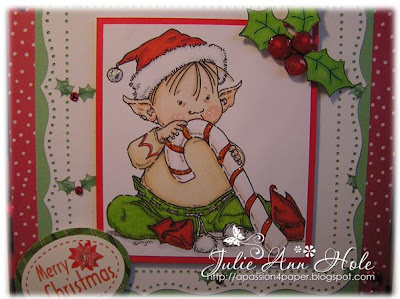 I coloured him with Copic markers but can't remember which colours were used. Another image that was coloured on my lunch hour.

The holly berrry and leaves embellishment is a Magnolia christmas stamp which I 3D'd with Glossy Accents.

Some areas have been accented with Stickles Star Dust especially his hat.

I love this image and I'm sure he will be well used in future. 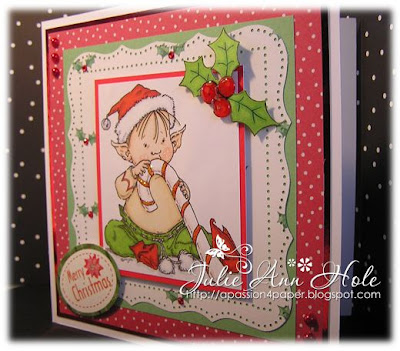 The sentiment oval is from my stash.
The matting is red mirror card which gives a lovely red glow to the card.

The card is finished with 3 red flatbacked pearls in opposite corners.

Thanks for visiting me,

Posted by Apassionforpaper at 8:26 am 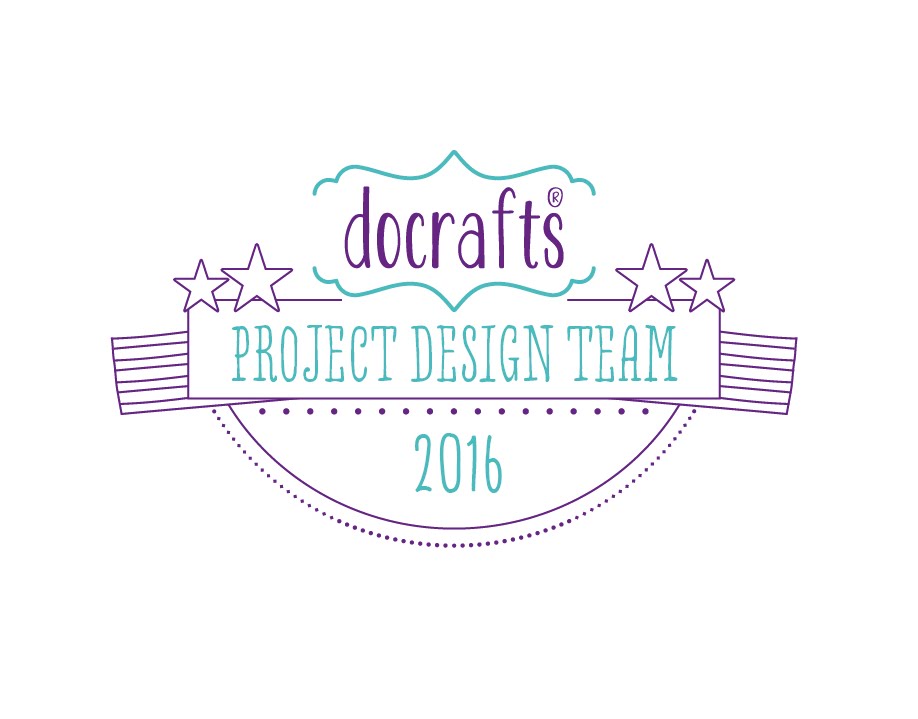 All cards and designs are copyrighted to me and are therefore my intellectual property.
I am more than happy for you to use my designs/cards as an inspirational starting point, however please respect my right not to have my designs:
1) directly copied
2) entered for publication or into competitions
3) reproduced in any way for financial gain.
Thank you for understanding and your cooperation

Join in the fun!

Which Austen Heroine are you?

I Made Top Three!

Past My Time to Craft DT Member